What is the AA Recovery Plan? 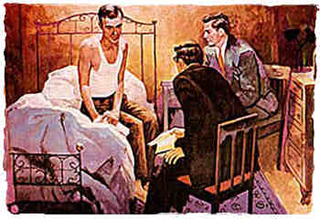 "WE OF Alcoholics Anonymous believe that the reader will be interested in the medical estimate of the plan of recovery described in this book."

In the forward to the first edition of the Big Book, the Founder and Pioneers of AA agreed to write:

"WE, OF Alcoholics Anonymous, are more than one hundred men and women who have recovered from a seemingly hopeless state of mind and body. To show other alcoholics precisely how we have recovered is the main purpose of this book."

In the Chapter There Is A Solution, page 17, we read: "The tremendous fact for every one of us is that we have discovered a common solution. We have a way out on which we can absolutely agree, and upon which we can join in brotherly and harmonious action."

Some, who read this will immediately answer: 1. It's God. 2. A Higher Power. and, that's PARTIALLY right.

However, if you read this closely -- the entire page and chapter, and use some common sense rules of logic to examine it you will first have to ask this most important question:

What is: ONE THING that alcoholics in AA can absolutely agree AND upon which they can join -- in brotherly -- AND harmonious action?

1. They can ALL agree -- that the body and mind of the alcoholic are abnormal. That an alcoholic can NOT safely use alcohol in ANY FORM nor, in ANY QUANTITY -- whatsoever. El Zippo! Nadda. No alcohol whatsoever! Total abstinence. That is Step 1. First Things First!

2. Can they ABSOLUTELY AGREE on God? No. If that was POSSIBLE -- then, why did they conclude later in the book, that you could come up with your own conception of God -- "as long as it makes sense to YOU." And, later indicate that "you can call it anything you want -- use your own conception."? There were some AA's in the original founding bunch who couldn't agree on God -- but they could agree on "some sort of Higher Power." This would be Step 2.

3. Also remember, by the paragraph above that it will be brotherly: What could that mean? Well. Associating with other SOBER alcoholics -- and ATTEMPTING to help other alcoholics to get sober! (That would be Step 12).

So, what's left -- that they can do, and absolutely agree upon? The brotherly AND harmonious ACTION. This would be Steps 3 through 9, and then Steps 10 through 12.

You see, the ONLY THING that they can absolutely agree upon is: THE PLAN OF ACTION! And, the ACTION -- is the 12 Steps.

We would have to conclude then that THE SOLUTION IS THE 12 STEPS.

Yes. I know many will disagree with this -- because "it requires them to think" -- and alcoholics who like to think -- are often lazy thinkers -- UNLESS it's something that they are emotionally biased about. Rigid thinking.

Any way that you look at it -- it has got to be A COURSE OF ACTIONS.

Many had ALREADY tried God, Faith, Religion, Belief, Psychology, Psychiatry, and every other possible thing that you could come up with ad infinitum! (As mentioned in Chapter 3, of the Big Book).

Those who would say -- lack of Power is their problem, is also PARTIALLY correct.

And, those who say POWER is the solution -- are PARTIALLY correct.

And, those who say God is the solution -- are PARTIALLY correct.

What CAN be absolutely agreed upon is: ACTION -- AND -- FELLOWSHIP. The 12 Steps is the ACTION -- and to practice Step 12, and to not forget the First Step -- we MUST associate ourselves WITH other recovering/recovered alcoholics. We do this because our Plan of Recovery requires us to "carry this message" to other alcoholics, so that they, too, can recover. Our book states that " Helping others is the foundation stone of your recovery. " ~Page 97, Big Book

Bill W., who authored the Big Book, later on refers to THE PROGRAM -- THE PLAN -- as a "Spiritual tool-kit."

Thus, we COULD ALL agree on the TOOL-KIT. Because we already know that faith and belief are dead -- without ACTION! And, more action! Faith without action would NOT keep me sober. :-)

Recovery takes place as a result of an alcoholic following the directions in the book Alcoholics Anonymous -- which will take the alcoholic through the AA 12 Steps of Recovery -- and enable them to discover a Power Greater than Their Self -- that can and will do for them -- what they have been powerless and unable to do for themselves -- and to assist them to help other alcoholics to recover (which is a requirement for recovery).