About Addiction and 12 Step Recovery 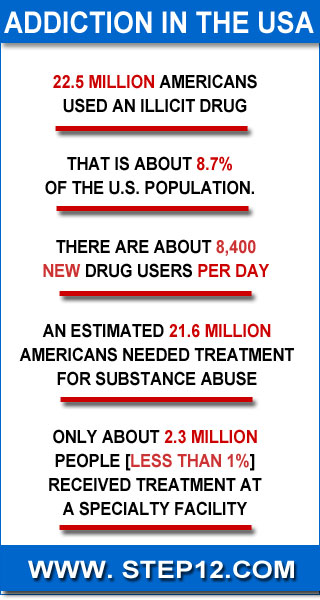 22.5 MILLION AMERICANS USED AN ILLICIT DRUG. THAT IS ABOUT 8.7% OF THE U.S. POPULATION.

THERE ARE ABOUT 8,400 NEW DRUG USERS PER DAY

ONLY ABOUT 2.3 MILLION PEOPLE [less than 1%] RECEIVED TREATMENT AT A SPECIALTY FACILITY

Here is a talk given by Tom B., Jr. that many consider to be one of the best talks they've ever heard that provides an explanation to the problem of addiction.


The Service and Operating Structure of the Primary Organization, which today is called Alcoholics Anonymous World Services, or AAWS, for short -- is still primarily guided and directed by AA members, from local Groups, who have decided that Structured Service is their calling and duty and responsibility. (An idea that is not shared by all AA's).

Step One -- The Most Often Misquoted Step of A.A.'s 12 Steps

— A detailed observation of A.A.'s Step One. Have you noticed how often the AA First Step is Misquoted and Mis-stated when read and discussed in meetings? This article is about it.