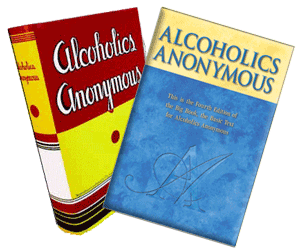 MOST OF us have been unwilling to admit we were real alcoholics. No person likes to think he is bodily and mentally different from his fellows. Therefore, it is not surprising that our drinking careers have been characterized by countless vain attempts to prove we could drink like other people. The idea that somehow, someday he will control and enjoy his drinking is the great obsession of every abnormal drinker. The persistence of this illusion is astonishing. Many pursue it into the gates of insanity or death.

We learned that we had to fully concede to our innermost selves that we were alcoholics. This is the first step in recovery. The delusion that we are like other people, or presently may be, has to be smashed.

We alcoholics are men and women who have lost the ability to control our drinking. We know that no real alcoholic ever recovers control. All of us felt at times that we were regaining control, but such intervals-usually brief-were inevitably followed by still less control, which led in time to pitiful and incomprehensible demoralization. We are convinced to a man that alcoholics of our type are in the grip of a progressive illness. Over any considerable period we get worse, never better.

We are like men who have lost their legs; they never grow new ones. Neither does there appear to be any kind of treatment which will make alcoholics of our kind like other men. We have tried every imaginable remedy. In some instances there has been brief recovery, followed always by a still worse relapse. Physicians who are familiar with alcoholism agree there is no such thing as making a normal drinker out of an alcoholic. Science may one day accomplish this, but it hasn't done so yet.

Despite all we can say, many who are real alcoholics are not going to believe they are in that class. By every form of self-deception and experimentation, they will try to prove themselves exceptions to the rule, therefore nonalcoholic. If anyone who is showing inability to control his drinking can do the right- about-face and drink like a gentleman, our hats are off to him. Heaven knows, we have tried hard enough and long enough to drink like other people!

"Some of you are thinking: “Yes, what you tell us is true, but it doesn’t fully apply. We admit we have some of these symptoms, but we have not gone to the extremes you fellows did, nor are we likely to, for we understand ourselves so well after what you have told us that such things cannot happen again. We have not lost everything in life through drinking and we certainly do not intend to. Thanks for the information.”

That may be true of certain nonalcoholic people who, though drinking foolishly and heavily at the present time, are able to stop or moderate, because their brains and bodies have not been damaged as ours were. But the actual or potential alcoholic, with hardly an exception, will be absolutely unable to stop drinking on the basis of self-knowledge. This is a point we wish to emphasize and re-emphasize, to smash home upon our alcoholic readers as it has been revealed to us out of bitter experience." ~pages 38-39, Alcoholics Anonymous.

Step One of AA's 12 Steps video

Step One of AA's 12 Steps video Father Joseph C. Martin (October 12, 1924 – March 9, 2009) was a Roman Catholic priest, recovering alcoholic and renowned speaker/educator on the issues of alcoholism and drug addiction. These talks were first published in the book, Chalk Talks by Father Martin.

Can drinking too much kill you?

Alcohol Poisoning. Is it true that it is very often fatal and can kill you?